Product DescriptionThomas Keller shares family-style recipes that you can make any or every day. In the book every home cook has been waiting for, the revered Thomas Keller turns his imagination to the American comfort foods closest to his heart—flaky biscuits, chicken pot pies, New England clam bakes, and cherry pies so delicious and redolent of childhood that they give Proust’s madeleines a run for their money. Keller, whose restaurants The French Laundry in Yountville, California, and Per Se in New York have revolutionized American haute cuisine, is equally adept at turning out simpler fare.

In Ad Hoc at Home—a cookbook inspired by the menu of his casual restaurant Ad Hoc in Yountville—he showcases more than 200 recipes for family-style meals. This is Keller at his most playful, serving up such truck-stop classics as Potato Hash with Bacon and Melted Onions and grilled-cheese sandwiches, and heartier fare including beef Stroganoff and roasted spring leg of lamb. In fun, full-color photographs, the great chef gives step-by-step lessons in kitchen basics— here is Keller teaching how to perfectly shape a basic hamburger, truss a chicken, or dress a salad. Best of all, where Keller’s previous best-selling cookbooks were for the ambitious advanced cook, Ad Hoc at Home is filled with quicker and easier recipes that will be embraced by both kitchen novices and more experienced cooks who want the ultimate recipes for American comfort-food classics.

Amazon.com ReviewAmazon Best Books of the Month, November 2009: You don’t often see the name Thomas Keller mixed with words like “accessible” or “home cook,” but with Ad Hoc at Home, the award-winning chef presents a collection of recipes destined for the center of the table at casual family gatherings. Don’t throw away your whole notion of “quick and easy,” though, as this is still a casual cookbook filtered through the genius mind of the man behind The French Laundry Cookbook, but the sense of whimsy and the pure joy of Keller doing his version of comfort food proves irresistible. The inspiration for his restaurant Ad Hoc was the simple family meals created and served by the staff at his restaurants. As he says in the introduction, “here is food meant to be served from big bowls and platters passed hand to hand at the table.” And with dishes like Buttermilk Fried Chicken and Pineapple Upside-Down Cake, who’s going to argue with that? —Brad Thomas Parsons

If there’s a better fried chicken, I haven’t tasted it. First, and critically, the chicken is brined for 12 hours in a herb-lemon brine, which seasons the meat and helps it stay juicy. The flour is seasoned with garlic and onion powders, paprika, cayenne, salt, and pepper. The chicken is dredged in the seasoned flour, dipped in buttermilk, and then dredged again in the flour. The crust becomes almost feathered and is very crisp. Fried chicken is a great American tradition that’s fallen out of favor. A taste of this, and you will want it back in your weekly routine. –Thomas Keller 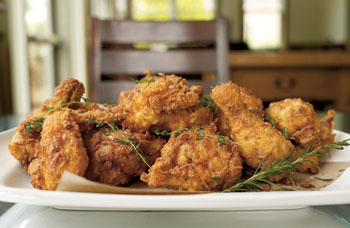 For Dredging and Frying

Cut each chicken into 10 pieces: 2 legs, 2 thighs, 4 breast quarters, and 2 wings. Pour the brine into a container large enough to hold the chicken pieces, add in the chicken, and refrigerate for 12 hours (no longer, or the chicken may become too salty).

Remove the chicken from the brine (discard the brine) and rinse under cold water, removing any herbs or spices sticking to the skin. Pat dry with paper towels, or let air-dry. Let rest at room temperature for 1-1/2 hours, or until it comes to room temperature.

If you have two large pots (about 6 inches deep) and a lot of oil, you can cook the dark and white meat at the same time; if not, cook the dark meat first, then turn up the heat and cook the white meat. No matter what size pot you have, the oil should not come more than one-third of the way up the sides of the pot. Fill the pot with at least 2 inches of peanut oil and heat to 320°F. Set a cooling rack over a baking sheet. Line a second baking sheet with parchment paper.

Carefully lower the thighs into the hot oil. Adjust the heat as necessary to return the oil to the proper temperature. Fry for 2 minutes, then carefully move the chicken pieces around in the oil and continue to fry, monitoring the oil temperature and turning the pieces as necessary for even cooking, for 11 to 12 minutes, until the chicken is a deep golden brown, cooked through, and very crisp. Meanwhile, coat the chicken drumsticks and transfer to the parchment-lined baking sheet.

Transfer the cooked thighs to the cooling rack skin-side-up and let rest while you fry the remaining chicken. (Putting the pieces skin-side-up will allow excess fat to drain, whereas leaving them skin-side-down could trap some of the fat.) Make sure that the oil is at the correct temperature, and cook the chicken drumsticks. When the drumsticks are done, lean them meat-side-up against the thighs to drain, then sprinkle the chicken with fine sea salt.

Turn up the heat and heat the oil to 340°F. Meanwhile, coat the chicken breasts and wings. Carefully lower the chicken breasts into the hot oil and fry for 7 minutes, or until golden brown, cooked through, and crisp. Transfer to the rack, sprinkle with salt, and turn skin side up. Cook the wings for 6 minutes, or until golden brown and cooked through. Transfer the wings to the rack and turn off the heat. Arrange the chicken on a serving platter. Add the herb sprigs to the oil (which will still be hot) and let them cook and crisp for a few seconds, then arrange them over the chicken.

Note on Chicken Size: You may need to go to a farmers’ market to get these small chickens. Grocery store chickens often run 3 to 4 pounds. They can, of course, be used in this recipe but if chickens in the 2-1/2- to 3-pound range are available to you, they’re worth seeking out. They’re a little easier to cook properly at the temperatures we recommend here and, most important, pieces this size result in the optimal meat-to-crust proportion, which is such an important part of the pleasure of fried chicken.

Note: We let the chicken rest for 7 to 10 minutes after it comes out of the fryer so that it has a chance to cool down. If the chicken has rested for longer than 10 minutes, put the tray of chicken in a 400°F oven for a minute or two to ensure that the crust is crisp and the chicken is hot.

The key ingredient here is the lemon, which goes wonderfully with chicken, as do the herbs: bay leaf, parsley, and thyme. This amount of brine will be enough for 10 pounds.

Combine all the ingredients in a large pot, cover, and bring to a boil. Boil for 1 minute, stirring to dissolve the salt. Remove from the heat and cool completely, then chill before using. The brine can be refrigerated for up to 3 days.