Bitters: A Spirited History of a Classic Cure-All, with Cocktails, Recipes, and Formulas

Product DescriptionGone are the days when a lonely bottle of Angostura bitters held court behind the bar. A cocktail renaissance has swept across the country, inspiring in bartenders and their thirsty patrons a new fascination with the ingredients, techniques, and traditions that make the American cocktail so special. And few ingredients have as rich a history or serve as fundamental a role in our beverage heritage as bitters.

Author and bitters enthusiast Brad Thomas Parsons traces the history of the world’s most storied elixir, from its earliest “snake oil” days to its near evaporation after Prohibition to its ascension as a beloved (and at times obsessed-over) ingredient on the contemporary bar scene. Parsons writes from the front lines of the bitters boom, where he has access to the best and boldest new brands and flavors, the most innovative artisanal producers, and insider knowledge of the bitters-making process.

Whether you’re a professional looking to take your game to the next level or just a DIY-type interested in homemade potables, Bitters has a dozen recipes for customized blends–ranging from Apple to Coffee-Pecan to Root Beer bitters–as well as tips on sourcing ingredients and step-by-step instructions fit for amateur and seasoned food crafters alike.

Also featured are more than seventy cocktail recipes that showcase bitters’ diversity and versatility: classics like the Manhattan (if you ever get one without bitters, send it back), old-guard favorites like the Martinez, contemporary drinks from Parsons’s own repertoire like the Shady Lane, plus one-of-a-kind libations from the country’s most pioneering bartenders. Last but not least, there is a full chapter on cooking with bitters, with a dozen recipes for sweet and savory bitters-infused dishes.

Part recipe book, part project guide, part barman’s manifesto, Bitters is a celebration of good cocktails made well, and of the once-forgotten but blessedly rediscovered virtues of bitters. 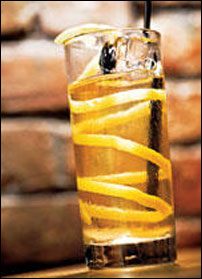 Called “the great what-is-it of the Highball tribe” by David A. Embury in The Fine Art of Mixing Drinks, the Horse’s Neck started as a nonalcoholic drink in the 1890s, but the addition of whiskey, bourbon, rye, brandy, scotch, or even gin brought a spirited kick to this refreshing highball. The drink, per Embury, “degenerated” into a nonalcoholic beverage once again during Prohibition. Bourbon and ginger ale is one of my favorite marriages of spirit and mixer, so that is recommended here.

The garnish is achieved by positioning one continuous spiral of zest from a whole lemon so that it is flapping over the glass’s edge, invoking the silhouette of a horse’s mane. Personally, the lemon corkscrew puts me in the mind of a pig’s tail, but I suppose the Pig’s Tail isn’t as elegant a name as the Horse’s Neck.

Carefully peel the zest from the lemon in one continuous spiral with a channel knife. Coil the zest around a barspoon or chopstick to encourage a bouncy spiral.

Place the lemon zest in the bottom of a chilled highball glass, hanging the end of the coiled garnish over the side of the glass. Fill the glass with ice.

Add the bourbon and bitters and top off with ginger ale.

We could slip away
Wouldn’t that be better? 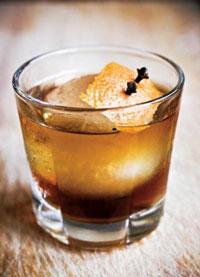 The bittersweet lyrics of “Autumn Sweater,” from Yo La Tengo’s 1997 album, I Can Hear the Heart Beating As One, serve as the source material for this melancholy change-of-season shoegazer. Serve it over a large block of ice, or over an ice sphere–even better to evoke a fat harvest moon hanging in the nighttime sky.

Made in Sicily since 1868, Averna is a syrupy, bitter herbal liqueur. It isn’t overpowering, though, and is a great gateway amaro if you’re interested in exploring potable bitters. Amaro Nonino is another mild Italian digestif whose caramel color and warm, spicy burnt orange notes round out the full fall flavors here. Wrap yourself in an Autumn Sweater and embrace what the season has in store for you.

Combine all the ingredients except the garnish in a mixing glass filled with ice and stir until chilled. Add a large sphere of ice to a chilled double old-fashioned and strain the drink into the glass.

For the garnish, use a paring knife to slice a thick strip of zest from an orange. Twist it over the drink to release the essential oils and rub along the rim of the glass. Stud the orange zest with two whole cloves and drape it over the ice sphere. 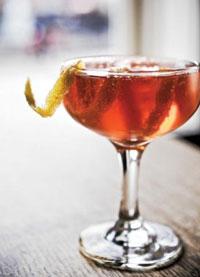 Is there anything more festive than hearing the soft pop of a cork coming out of a bottle of Champagne? That’s an aural cue for celebration in my book, and while Champagne is wonderful on its own, adding a sugary, bitters-soaked kiss to the equation elevates the experience tenfold. Four to six dashes of bitters should do the trick, but you really want to soak the sugar cube, which, once the Champagne is introduced, will leave a fizzy stream of bitters pushing up through the glass.