To make a delicious Better Than Sex Cake so good, your guests swoon with pleasure, use a rich devil’s food cake, scrumptious caramel sauce, and lots and lots of real whip cream.

What makes this Better than Sex Cake recipe so decadent is that we include two different ways to make everyone’s favorite party cake.

The show stopper is a multi-layered version that elevates the classic into a stunner by adding a second layer of gooey chocolate cake, whipped cream, and crunch. We also have a simple version perfect for feeding large groups baked in a standard 9×13-inch pan.

It’s not very often you come across a recipe that makes people blush and giggle when you say its name or has so many aliases it deserves a wanted poster.

This cake is a popular dessert for potlucks, office parties, birthdays, and anywhere chocolate lovers gather. It’s simple to make and an easy way to satiate lots of people looking for something filled with rich chocolate flavors.

Whether or not the delicious cake lives up to its name is for you to decide, but for your sake, we hope it doesn’t.

What this decadent chocolate treat is, is a chocolate poke cake, which in this case, isn’t a euphemism. A poke cake is one you poke holes in after it’s been baked to add a filling, liquid, or sauce. In this case, a combination of condensed milk and caramel sauce. Other popular versions use pudding and jello to add flavor and moisture to standard box mixes.

Ingredients for A Better Than Sex Cake

It only takes a few ingredients to pull this treat together. Most of the ingredients are pantry staples that can be kept on hand so that you can whip up this treat anytime you’re in the mood.

Devil’s Food Cake Mix – We recommend using a Devil’s Food cake, homemade or box mix, as the basis for this recipe. Any chocolate cake will work, but the richness of Devil’s Food, along with the name, makes it ideal. A German chocolate mix is a good substitute. Most mixes require eggs, vegetable oil, and water.

Sweet and Condensed Milk – The sweet and condensed milk is what gives this recipe its incredible moistness and gooey texture.

Caramel Topping – The caramel topping provides a contrasting set of flavors to the chocolate that gives each bite a deep rich flavor. Any good caramel ice cream topping will work.

Whipped Cream – Most recipes call for Cool Whip or other whipped toppings, which will work but are incredibly disappointing once you’ve had this recipe with real whipped cream. Real whipped cream elevates the flavor and texture beyond what the fake stuff can achieve.

Heath Toffee Bits – The crunch from the toffee bits brings everything together. Most grocery stores have bags of heath bars crumbled into toffee bits in the baking aisle. Using bits that have been already crunched is much easier than breaking up whole heath bars into chunks with a knife. Skor bars are a good substitute.

Two Ways to Make It

The most common way to make this recipe is to bake it in a 9×13 baking dish. It’s not the prettiest way to serve a decadent dessert, but it works well if you’re serving a large group.

The reason it’s usually served straight from the pan is the addition of condensed milk and caramel sauce makes it challenging to take a 9×13-inch cake out of the pan in one piece.

For this recipe, we wanted to create something unique with a truly show-stopping presentation because, let’s get real, who wants their better than sex cake to be ordinary?

To mix things up and create a more visually interesting dessert, we bake the cake in two layers using 9-inch round pans. The smaller pans make it easier to get the layers out.

Using parchment liners in the bottom of the pans makes it even easier to get the layers out after the caramel mixture has been added.

One of the nice things about using whipped cream for the topping is that it easily covers up a multitude of sins if the layers don’t come out smoothly.

Turning this recipe into a layer cake also creates the opportunity to add a middle layer of whipped cream and crumbled toffee bits that add texture and flavor in a way that complements the cake’s moistness.

How to Make the Best Better Than Anything Cake

One of the reasons why this chocolate cake recipe is so popular is that it turns a simple box mix into a luscious dessert.

1. Bake the layers per the directions on the box, or use your favorite chocolate cake recipe. Use a rich chocolate cake, whether you’re making it from scratch or using a mix. We recommend using a Devil’s Food cake for obvious reasons, along with its superior texture and flavor.

2. After the layers have finished baking and while still warm, poke them full of holes. We generally space the holes an inch apart. As far as poking tools go, nothing beats the large end of a good chopstick.

3. Warm the condensed milk and caramel topping on the stove in a small saucepan before pouring the mixture over each layer. Warming the mixture helps distribute the flavors evenly and makes it easier to pour.

It helps to pause now and then while pouring to let the sauce soak into each layer, which keeps it from running across the top and pooling on the sides. Once the sauce has been added, the layers should be refrigerated and chilled for at least 30 minutes before the whipped cream is added.

4. Remove each layer from its pan after it’s been chilled by running a knife along the edge and turning the pan over quickly. To prevent the rounds from sticking, it can be helpful to use parchment liners and a small spatula to lift the edge of the layer before turning it over.

This recipe can be made ahead of time and is at its best a couple of hours after the caramel mixture has soaked into the airy chocolate cake.

5. Starting with the bottom layer, spread a thick layer of whip cream across the top and sprinkle on a layer of toffee bits. Use around a third of the whipped cream for the middle layer and two-thirds for the top layer.

Place the second layer on top and spread a thick layer of whipped cream across the top, along with a heavy sprinkle of toffee bits.

Like everything in life, this dessert tastes much better with natural whipped cream instead of the fake stuff that lives in the freezer and is basically the scourage of all that is good in the world.

The easiest way to make whipped cream at home is to use a stand mixer. Hand mixers also work well. This Maple Whipped Cream recipe has all the details.

The finished dessert should be stored in the fridge in an airtight container with plenty of headroom and will keep for a couple of days. It might last longer than three or four days, but we’ve never been able to keep one around for more than two.

Can I make BTS Cake a Day Ahead?

The cake can be made a day or two in advance. For the best results, it should be assembled on the day it’s being served. This helps keep the whipped cream and toffee bits looking sharp.

What is a poke cake?

A poke cake has holes poked in it after it’s been baked so a filling, liquid, or sauce can be added. This is done to add moisture and flavor. It can also create a clever visual effect when the cake is sliced if the base layer and filling have contrasting colors.

Can I use a white or yellow cake mix instead of chocolate?

Feel free to substitute your preferred flavor. This recipe will work with a white or yellow cake mix.

What is the best way to poke holes in a poke cake?

The best tool we’ve found for poking holes is the thick end of a chopstick.

Does Better Than Sex Cake live up to its name?

That’s a personal question for you to decide, but for your sake, we hope it doesn’t.

With a name that’s a built-in conversation starter, this recipe is ideal for dinner parties, especially when it’s made as a layered cake and takes center stage at the end of a meal. If it’s being served at a birthday party or other shindig, have some fun adding a custom cake topper.

A few of our favorite recipes for chocolate lovers include these rich and gooey Ultimate Chocolate Peanut Butter Brownies and this simple Molten Lava Cake recipe.

A few dishes we love to serve it with include a Slow Roasted Roast Beef so tender you can cut it with a fork, a couple of beautifully Grilled Ribeye Steaks, or a slowly Smoked Pork Loin.

No matter what you serve for the main course, this is one of those desserts that is particularly delicious with Freshly Brewed Coffee straight from a French Press or a round of Classic Old Fashioneds or Boulevardiers. 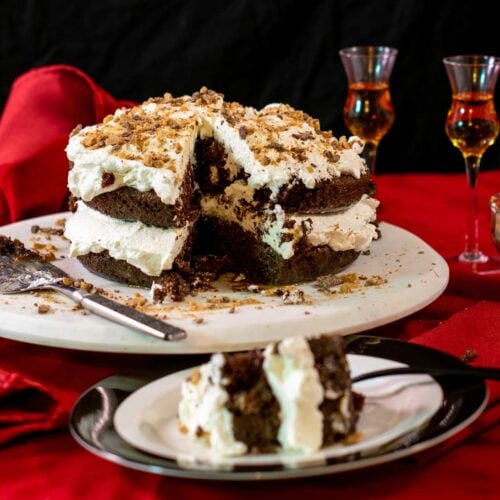 To learn more about baking this cake, check out our YouTube Video.