This homemade mushroom, onion, and sage stuffing recipe is an excellent companion for roasted or grilled turkey, chicken, and pork dishes.

The best stuffings are all about contrast, the crisp bits browned on the outside edges that contrast with the creamy interior in the same way that the bright, almost citrus flavors of the sage provide a counterpoint to the earthiness of the mushrooms.

The contrasts are the thing driving us back for one more bite, looking for that little crispy bit of edge to pair with that last piece from the center with its soft custardy texture.

One of the best things about making stuffing from scratch is it allows cooks to build flavors and textures from the ground up using the type of bread, seasonings, and ingredients they want to create the perfect stuffing, the kind that their family dreams about all year long.

How to Make Homemade Stuffing

The foundation for all good stuffing recipes starts with the choice of bread. Depending on the type of stuffing, the bread can range from a nice loaf of French bread to crumbly cornbread. The most important thing is that the bread is fresh and that the flavors in the bread play well with the other ingredients going into the stuffing.

The flavors in this recipe, sage, and thyme paired with mushrooms, onions, and celery, are classic stuffing flavors that pair well with roasted or grilled turkey, chicken, and pork dishes.

To develop the flavors in the dish, the aromatics and fresh herbs are sautéd in butter before being combined with the bread. Depending on the amount of mushrooms going into the stuffing, they can be sautéd with the aromatics or browned separately.

To properly brown mushrooms, there needs to be space in the pan for them to shed their liquid. We recommend browning them on medium heat in a large pan until golden brown. This step is more important when making a mushroom forward stuffing where the fungi are the stars and not just a member of the chorus as they are in this recipe.

The thing that brings this traditional stuffing recipe together is a combination of milk, eggs, and chicken broth that permeates the little holes and crevices in the bread giving the stuffing a creamy, almost custard like texture—creating a dish that is very similar to a Savory Bread Pudding.

Soaking the bread in the milk, egg, and broth mixture helps the bread absorb the flavors from the other ingredients and creates a creamy texture in the dressing that is the perfect complement to the crispy bits that form on the top and along the edges that are exposed to the heat from the oven.

The USDA also recommends that dry and wet ingredients are not combined before cooking and that the stuffing should not be cooled before being stuffed into a bird. (USDA Stuffing and Food Safety Guide)

As much as we love stuffing cooked in the bird, we’ve moved away from this because the best way we’ve found to cook flavorful turkeys with tender and juicy meat is to smoke or grill them. Neither cooking method lends itself to cooking the stuffing in the bird. For more info on cooking delicious turkey, see our recipes for Smoked Turkey or Grilled Turkey with Fresh Herbs.

To turn this recipe into a vegetarian stuffing, replace the chicken stock with vegetable stock.

If you’re making the stuffing and need to travel with it, e.g., you’re off to Grandma’s house, pick up one of these baking dishes with a cover and an insulated carrying case that keeps dishes warm or cool while traveling. Once the stuffing arrives at its destination, warm it up uncovered in a 350℉ (177℃) oven for 10 to 15 minutes to crisp the top back up.

There is an enormous amount of information on how to make perfect crispy stuffing. Here is a brief list of the best tips we found from our research and testing.

There are a couple of different ways to prep the bread for stuffing. The first step is to tear it into bite-sized pieces. We prefer tearing the bread into pieces over using a bread knife to cut it into bread cubes because we prefer a more rustic stuffing and find that tearing it creates more thin edges to crisp up.

Most traditional recipes recommend leaving the bread out for a couple of days to dry out. The problem with this approach is that while it removes some of the moisture in the bread, it also makes the bread stale, introducing unwanted flavors.

A better way to dry the bread is to toast the pieces in a 300℉ (149℃) oven for 15 to 20 minutes. The pieces should go into the oven on a large rimmed baking sheet and be stirred halfway through.

When it comes to choosing bread, our preference is to use good French bread, country white, or sourdough. Cornbread is an excellent choice if southwestern flavors are being used. The most important thing is to choose bread with flavors that will complement the flavors from the other ingredients.

If the loaf is going to be cut into bread cubes, use a bread knife. Using a bread knife helps to prevent compressing the bread, which makes it easier to dry out and opens up space for the egg mixture. For those that prefer to cut up their bread, the most common size is 1-inch cubes.

We do not recommend adding bread crumbs to the top of the stuffing. Some recipes call for bread crumbs as a way to add additional texture; we found that it prevents the large pieces from crisping up and muddies the overall texture.

There are hundreds, if not thousands, of different seasoning combinations that can be used to make stuffing at home. Our general rule of thumb is to focus on combinations of one or two ingredients from a few categories, picking ingredients that have flavors that go well together but create contrasting textures.

A scrumptious example is this Stuffing with Sausage, Dried Cherries, and Apples that uses the savory flavors in the sausage to contrast the tartness in the cherries and the crispness in the apples.

Herbs – Fresh herbs should be used when they’re available because they have more flavor and a freshness that helps the stuffing pop. Herbs commonly used include fresh thyme, sage, rosemary, flat-leaf parsley, and marjoram.

Meat – Some more common types of meat to add to stuffing include oysters, pancetta, sausage, and bacon. When it comes to sausage, sage forward sausages are a popular choice. We’re fans of this Italian Turkey Sausage made with ground turkey; its robust herb-forward flavors adds a brightness to dishes.

Vegetables – Vegetables commonly used in stuffing include: white and yellow onions, leeks, shallots, garlic, fennel, chives, and scallions. A tip when sautéing the vegetables is not to overdo them; leaving them somewhat crisp creates a contrasting texture in the final dish.

Mushrooms – There are many different ways to add mushrooms to stuffing. Mushrooms add a deep umami flavor. This recipe takes a balanced approach where the amount of mushrooms is similar to the other ingredients.

For a more mushroom focused stuffing, double the amount of mushrooms while using two or three different types of wild mushrooms making sure to brown them before adding them to the bread mixture.

Fruit – Adding dried or fresh fruit is a simple way to add texture and flavor to a stuffing. Fruits commonly used include apples, apricots, cherries, cranberries, and raisins. In general, dried fruits add more sweetness than fresh fruit and have a more gummy texture.

Nuts – The most common nut used in stuffing is roasted chestnuts.

Cheese –  A less common addition is adding a small bit of cheese to the stuffing. In our research, the most common way to add cheese was adding half to a full cup of shredded parmesan and asiago before baking.

If the stuffing is too dry, add a little bit of chicken broth while it is still in the baking dish. The stuffing’s ability to absorb excess liquid will diminish as it cools.

If the recipe is being doubled, it’s easier to make the stuffing in two batches than it is to use a huge roasting pan.

The stuffing can be stored in an airtight container in the fridge for four or five days. The best way to reheat the stuffing is in a 300℉ (149℃) oven in a small casserole dish. If the leftover stuffing is starting to dry out, add a little chicken broth before putting it in the oven.

Once the stuffing has been cooked, it can be frozen in a freezer-safe container for several months. It should be defrosted in the fridge and baked in a casserole dish until the center reaches 165℉ (74℃).

A quick aside on the whole dressing or stuffing debate. One school of thought says a dish like this is stuffing when it’s cooked inside of something, say turkey, chicken, alligator, etc., and is dressing when it’s baked in a pan in the oven. Other people would argue that differences in usage are based more on regional variations than how it’s cooked.

Since we haven’t been convinced by either argument and this recipe works, either way, we’re using the terms interchangeably. If you feel strongly one way or the other, let us know why in the comments below.

What to Serve with Homemade Stuffing

Before we dive into what to serve with homemade stuffing, let’s get one thing out of the way. A good homemade stuffing is delicious any time of year, and it’s a bit ridiculous that the only time stuffing gets served is at Thanksgiving or other holidays. Where it usually steals the show as people’s favorite dish.

In addition to serving it as a side dish with a whole turkey, this classic stuffing recipe is delicious with Herb-Roasted Chicken Breasts, Grilled Pork Tenderloin, Tender Slow-Roasted Roast Beef, or A Maple Bourbon Glazed Turkey Breast.

Some other side dishes that have flavors that complement this dressing include Roasted Carrots with Rosemary and Fennel, Honey Glazed Butternut Squash, and Sautéed Green Beans with Balsamic Vinegar. 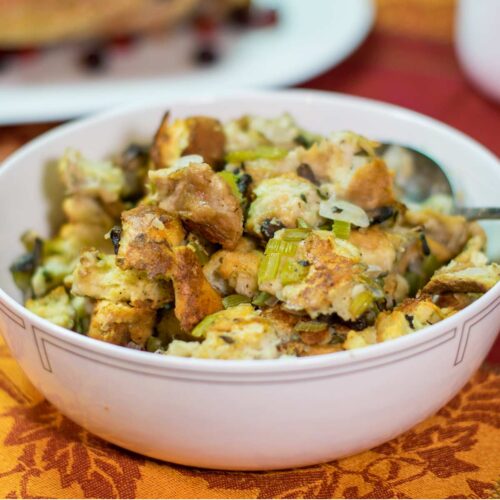 This stuffing can be cooked in a baking dish or stuffed into a bird. If it is being stuffed into a bird, the USDA strongly recommends that the internal temperature of the center of the stuffing reaches 165℉ (74℃) to avoid any food safety issues. The USDA also recommends that dry and wet ingredients are not combined before cooking and not to cool stuffing before stuffing a bird. (USDA Stuffing and Food Safety Guide)