Ribeye steaks are a popular cut of beef known for its unique combination of tenderness and flavor. The steaks are usually grilled or roasted in the oven 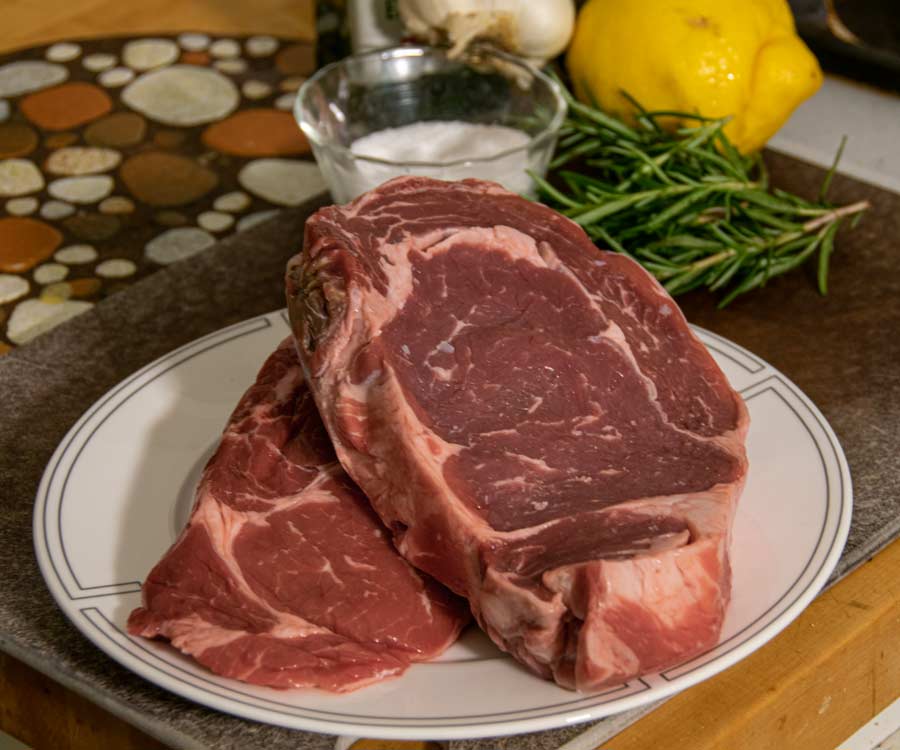 Ribeye steaks are well known cut of beef that is highly regarded for its unique combination of tenderness and flavor. The most common way to cook ribeyes is on the grill or in the oven.

What is a Ribeye Steak

A ribeye steak is a cut that comes from the rib section of a cow, usually between ribs six and twelve.

What makes this cut so desirable is that it comes from a part of the upper rib cage that isn’t used very much, producing a tender and flavorful cut with lots of marbling. The best ribeyes have a nice marbling throughout the whole steak.

Ribeye is somewhat of an outlier among cuts of beef; typically, the more tender a cut is the less flavorful it is. These steaks buck this trend by being among the most flavorful and tender cuts you can get from a cow.

Think about the difference between the delicate flavor and texture of beef tenderloin compared to the full-bodied taste and texture of flank steak and how tough the flank steak can be if it’s not cooked right and cut across the grain. Ribeyes combine the best of each in a single steak.

In the United States, ribeye is usually served off the bone, which is different than some other parts of the world where it is primarily served on the bone. In addition to being served as a single cut, ribeyes are often cut thin and grilled for sandwiches.

How to Cook Ribeyes

The most popular way to cook ribeye steaks is on the grill or roasting them in the oven. Our Perfectly Grilled Ribeye Steak recipe uses a combination of rosemary, garlic, and lemon juice to highlight the steak’s flavors, making it ideal for summer grilling. This is a great recipe for both gas and charcoal grills.

One way to elevate the flavor in ribeyes is to cook them directly over a woodfire. A lot of people can be intimidated by cooking over a campfire, which is why we wrote a guide for grilling steaks over an open fire that comes along with a recipe that highlights the flavors infused into the steaks from the fire.

This wood fire technique and recipe are delicious with T-bones, Porterhouses, NY Strip, and other similar cuts of beef.

What makes this grilled ribeye steak recipe so delicious is how the tender, well-marbled cut, absorbs the flavors from the rosemary and garlic along with the heat and smoke from the grill.

Steak Grilled Over An Open Fire

There is nothing like steak grilled over an open fire. This simple rub in this steak recipe highlights the flavors from a real wood fire.

How to Grill Steak Over an Open Fire

There’rs something about the flavor from cooking steak over a wood fire. It’s that slow blistering heat from using wood that makes the taste unforgettable.