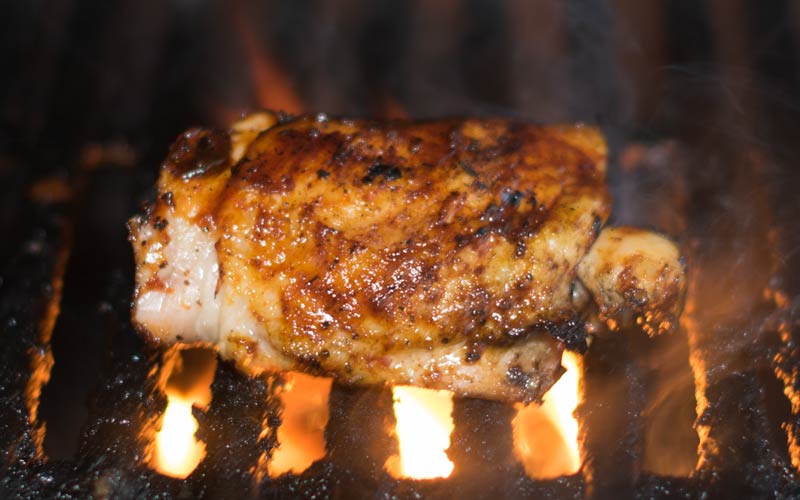 Sometimes it seems like barbecue chicken is the redheaded stepchild of the barbecue world.  All anyone ever talks about is ribs, and brisket, and whole hog, you never hear anyone say, “I got the best barbecue chicken.” I don’t want to diminish other types of barbecue in any way, they’re good friends, and I love them dearly, but barbecue chicken to die for is an art unto itself and in some ways harder to do well and a lot easier to ruin than ribs or brisket.

There are a lot of things about barbecue chicken that go overlooked.  The first is how quick and easy it is to make; unlike ribs or brisket that really need eight plus hours to be worth anything, you can make barbecue chicken on a standard grill with twenty-five to thirty minutes of cooking time.

The second is how rich and flavorful it can be.  The reason it’s so under-appreciated is because there are so many dried out, flavorless, boneless, skinless barbecue chicken breasts out there that people forget how good the genuine article can be.

Chicken also tends to be an afterthought when people go out for barbecue, which for a lot of people is a special occasion food, so it becomes about ordering the rich, fall apart ribs or pulled pork that people rarely make at home.  And sometimes it just feels better to order something different than a close relative of the chicken sandwich you have twice a week for lunch.

The reminder for me of how good real barbecue chicken can be is when I’m out with a group or at a place where you can order a sampler with a bunch of different cuts, and the chicken is almost always one of the best things on the plate.

Over the past year or so, I’ve started making barbecue chicken a lot more at home, both because it’s so easy and because it’s a nice change from the standard burgers and sausages that I usually make for friends.

Here are a few tips to help you make great barbecue chicken on the grill.

When you’re making barbecue chicken you want to start with real chicken, that means Bone-in, skin-on; if you think chickens are born in the wild as skinless, boneless chicken parts wrapped in plastic put down the test tube and get ready to eat something entirely different and way better than the dried out, stringy, flavorless excuse for meat you’ve been eating.

My preferred cut for barbecue chicken is thighs, compared to breast, legs, or wings, thighs have a better combination of tender meat, fat, and bone to provide a good handhold and keep everything moist and tasty.  Bigger thighs tend to work better than small ones because they hold on to their moisture better and work better for portioning out meals.

Grilled barbecue chicken can be done on a gas or charcoal grill.  My personal preference is to make it on a grill with lump hardwood charcoal which gives it a deeper smokier flavor than gas, but this technique will work on any grill.  The most important thing is to cook the chicken using indirect heat, right up until the end when you’re searing the sauce on and crisping the skin.

Using indirect heat is simple – in a charcoal grill you pile the coals on one side of the grill and place the chicken on the other side.  You can do the same thing on most gas grills by lighting a few burners and placing the chicken on the ones that are off.  The reason indirect heat is important is you want to cook the chicken slowly, so it cooks evenly all the way through without losing moisture.  This is also why you should use bone-in and skin-on chicken, both of which hold in moisture and add flavor during the cooking process.

Sauce On, Sauce Off

The sauce you use, and when you apply it are the keys to good barbecue chicken.  There are some good barbecue sauces in the grocery store, but not many stand out when you compare them to homemade or the ones from your favorite barbecue joint.  If you don’t have the time or inclination to make sauce at home, stop at your favorite barbecue joint and pick-up a bottle or two of theirs, it’s almost always better than what you can buy in the grocery store and most of the time it will have a lot fewer preservatives and crap than the stuff designed to shelf sit for years.

No matter how much the chicken asks; do not let it take a bath in the sauce before it goes on the grill.  In fact, don’t let the sauce get anywhere near the chicken until five to ten minutes before it’s ready to come off the grill.  If you add the sauce too early in the process, everything ends up sticky and tasting baked on.

The best time to add the sauce is when the chicken is just about cooked all the way through, and you’re ready to crisp everything up.  For chicken thighs, this is when the meat feels firm and starts to spring back to the touch.

This is the time to bring the heat.  With the chicken still on indirect heat, use a silicon brush and a cup full of sauce and paint some sauce lightly onto each piece of chicken and then flip them sauce side down on to the direct heat for thirty to sixty seconds, to let the sauce sear onto the meat.  I usually paint the other side with sauce while the one side is getting better acquainted with the fire. 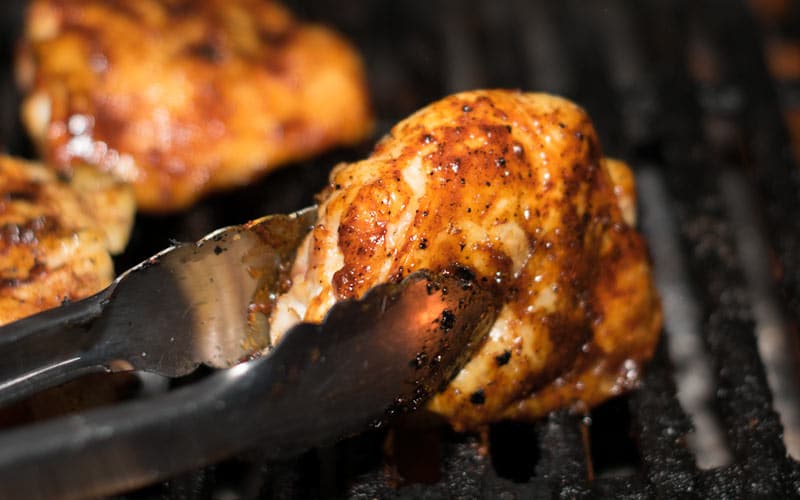 chicken over and some of the juice hits the hot fire.  Don’t worry, it’s a good show, and it helps crisp everything up.  Just make sure you’re not leaving anything on the fire so long that it burns.  It’s ok to get some color on the chicken, for most barbecue sauces this is the brown sugar caramelizing on the outside of the chicken – which makes it taste delicious.

You’ll want to repeat the process of painting the sauce on and searing it over direct heat three times to get a nice crispy exterior without losing too much of the moisture inside.  Once the chicken is off the grill, let it rest for a few minutes and serve it with some more of the barbecue sauce on the side.