Learning to Cook Italian with Chiara 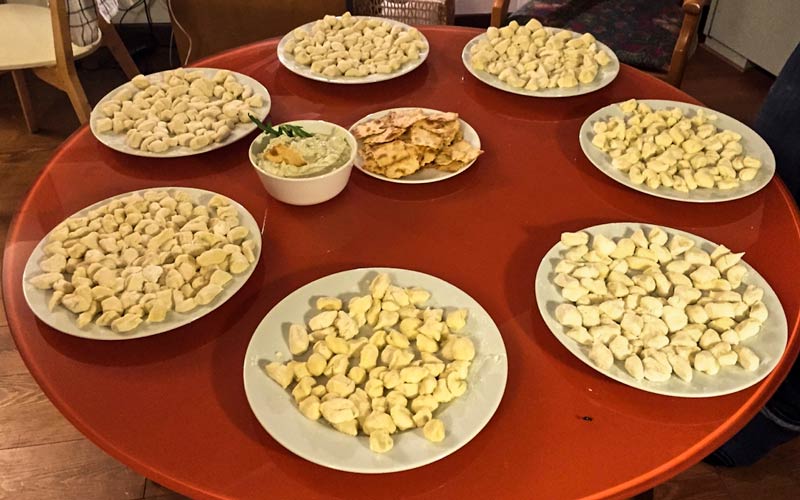 When daydreaming of idyllic vacations in Tuscany, my imagination is filled with images of drinking wine, eating noodles, and sunbathing from my picturesque seaside villa. But of course, no fantasy of mine is complete without an Italian teaching me their mother’s secret recipes while we roll out dough and hang noodles on clotheslines to dry in the sun.

It turns out these secrets are not as elusive as I had imagined. While in Padova on my post grad… sabbatical shall we call it, I found myself in a kitchen with an Italian butcher’s daughter struggling to cut potato dough into little circles. She boiled a pot of butter infused with sage, chopped tomatoes and whipped egg whites, seemingly simultaneously. I found Chiara through a shared Facebook group, and she agreed to teach my family and I a couple of traditional Italian recipes.

While I shopped for everything on her grocery list, I wondered how we could make three courses out of just fifteen ingredients, especially with half of them being various kinds of dairy. Nonetheless, I diligently tracked down all of the ingredients, having some fellow shoppers translate or walk me to the right section.

With several extra bottles of Prosecco in hand, I headed to the apartment rental and cleared off the kitchen table as well as the TV stand, in an attempt to have more than half a foot of counter space.

My cooking experiments are done alone, with all of the evidence quickly scrapped off the oven walls and floor before anyone has a chance to ask what the pan of half burnt half raw dough is supposed to be. But this woman, looking no older than myself, could cook… all while carrying on an in-depth conversation about her family’s old farm and her schooling in Padova. She never stopped to look at a recipe or set a timer and yet somehow, was perfectly in control of everything in the tiny two-burner kitchen.

She arrived with a few aprons, a hand mixer, and a small well used spatula. “I cannot leave without this.” She said as she handed it to me to fold in the egg whites for our tiramisu desert. A surprisingly easy desert that I always imagined to be very labor intensive, complicated, and only for the fanciest of tea parties.

We used a substitute of strawberry puree for the espresso, which was delicious. This desert is especially good when you make it with a group of people and are careful to make sure you aren’t the one tasked with whipping the eggs.  The left over puree goes great with a glass of Prosecco.

We divided the desert up into little glass jars, each making one and letting them sit in the fridge while we moved onto the aperitif: crackers with dip. Sure it’s easy to pick up a couple kinds of hummus or chip dip at the store, but why not transform some of the extra ingredients from your other courses into a fresh, arguably healthy and delicious appetizer?

We did just that, using ricotta cheese, mascarpone, mortadella ham, and arugula. By simply blending all of the ingredients together, we made an excellent dip to pair with a bowl of cracker chips. Although I would recommend setting this out about four hours before dinner is served, to maximize the amount of time you have to digest between the two. I definitely didn’t want to stop eating any of the courses.

For our next and final course, we reached way back into Italian history and tradition, making gnocchi from scratch.

It took a fearless teacher from the start. Our giant pot of water and potatoes spilled slightly, but constantly, while on a low boil. Any lower setting, the water wouldn’t boil. Any higher setting caused mass amounts of water to overflow onto the ill installed two piece electric stove, risking possible electrocution.

The potatoes were cooked through just as we were all telling ourselves, “don’t fill up on crackers and dip.” I washed off the table, and Chiara carried over the drained pot of potatoes. She brought a tool called a potato ricer and with ease turned a potato into a pile of what looked like, well, rice.

Let me tell you, don’t try to rice potatoes for the first time too confidently or you will be severely humiliated by everyone you are cooking with. It takes momentum and muscles, but if you don’t have either of those, it can be done if you have enough determination and it never hurts to have smaller potatoes.

We turned all of the potatoes into a mountain of fluffy rice shaped hash browns on the small IKEA kitchen table, letting them cool and adding pizza flour. For the next thirty minutes, we kneaded, rolled, and attempted to cut the dough into perfect round gnocchi shaped segments. We filled six plates with a not so even coating of not so perfectly shaped gnocchi. Chiara advised us that it’s best to eat a few now before they cooked, and speaking as a huge fan of raw cookie dough and undercooked cinnamon rolls, this step is not to be missed.

Plate by plate we boiled the gnocchi, collecting the ones floating to the top as they cooked to perfection. Preparing two equally delicious sauces for the gnocchi, we were all stuffed impossibly and regretfully quickly. Gnocchi is widely appreciated for both its affordability and for how filling it is.

The sauces we made to accompany the gnocchi were works of genius; I can’t believe I hadn’t been eating them my whole life. The first was a simple and traditional butter and sage sauce, boiled and poured on top of a plate of gnocchi as it sizzled and soaked into the potato dumplings. The second sauce consisted of chopped tomatoes with salmon lox.

I hope it is apparent how amazing all of this food was. I wished for my stomach to make some more room, unsuccessfully. We couldn’t even think about eating our tiramisu until several hours later, after a few Proseccos and left over strawberry puree mimosas. It was an amazing experience, and everyone learned so much.

My mother and brother who took the class with me are much more avid chefs than I am and neither of them could wait to get home to start cooking with the new Italian influences we learned. Some simple things that just aren’t done the same in America, like using gorgonzola in lasagna rather than cottage cheese, can be game changers when applied to what used to be “perfected” family recipes back in the states.

Italy continues to amaze me with its uncontested flavors and the welcoming kindness of the people I find here.