How to Make a Great Rum and Coke

Learn what rum to use, how much coke to add, and everything else you need to know to make your best rum and coke 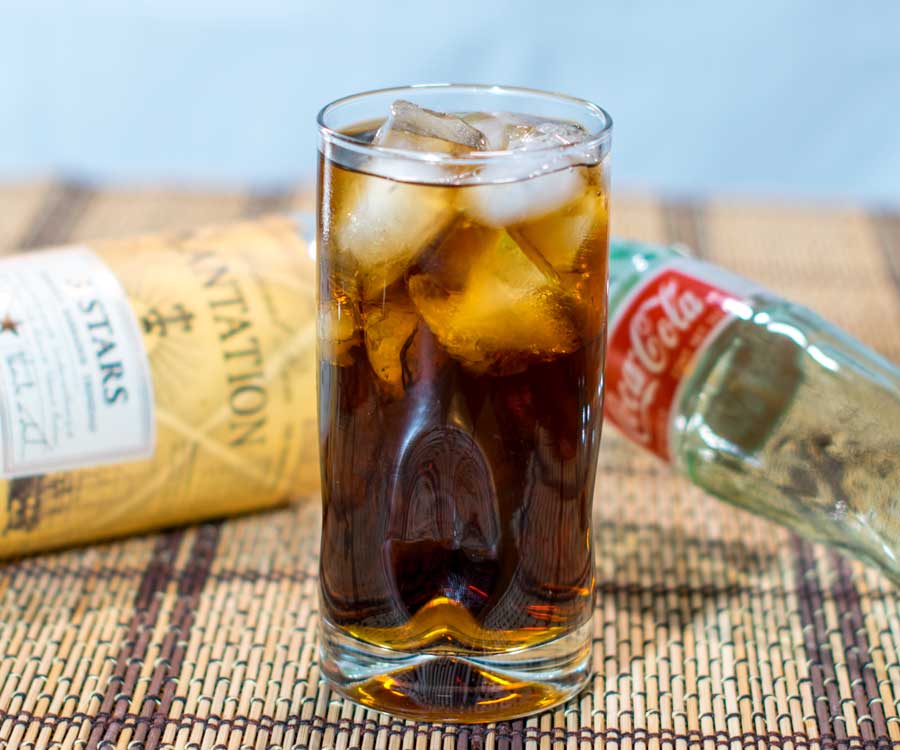 Learn how to make your best rum & coke

What makes the rum and coke so popular is how the smooth, slightly sweet flavors come together to create a simple, refreshing cocktail you can drink all night.

There are lots of rum and coke recipes scattered across the internet telling you great they are. What we’re going to try to do is help you figure out how to make your best rum and coke.

One of the nice things about simple cocktails is that with so few moving parts it’s relatively easy to figure out the right combination of ingredients and techniques that fits your taste. For this one, the variations involve types of rum, types of coke, and mixing ratios.

A rum & coke is a highball, which is a type of cocktail made with a spirit and a larger amount of nonalcoholic mixer. Highballs are usually served over ice in large straight-sided glasses that hold between 8 to 12 ounces.

Before getting too far into this we should clear up a popular misconception; a rum and coke is not a Cuba Libré, that’s an altogether different cocktail that involves doing more than garnishing a rum and coke with a slice of lime. Curious, read Why the Cuba Libré Hates Being Called a Rum and Coke. We also have a great Cuba Libré recipe.

Best Rum for a Rum and Coke

One of the things that sets this cocktail apart is that it is one of the few drinks people order using the name of their preferred rum, ordering it as a Bacardi Coke or Captain Coke. This is due in part to effective marketing campaigns by Bacardi and Captain Morgan and to how much the drink changes based on the rum being used. 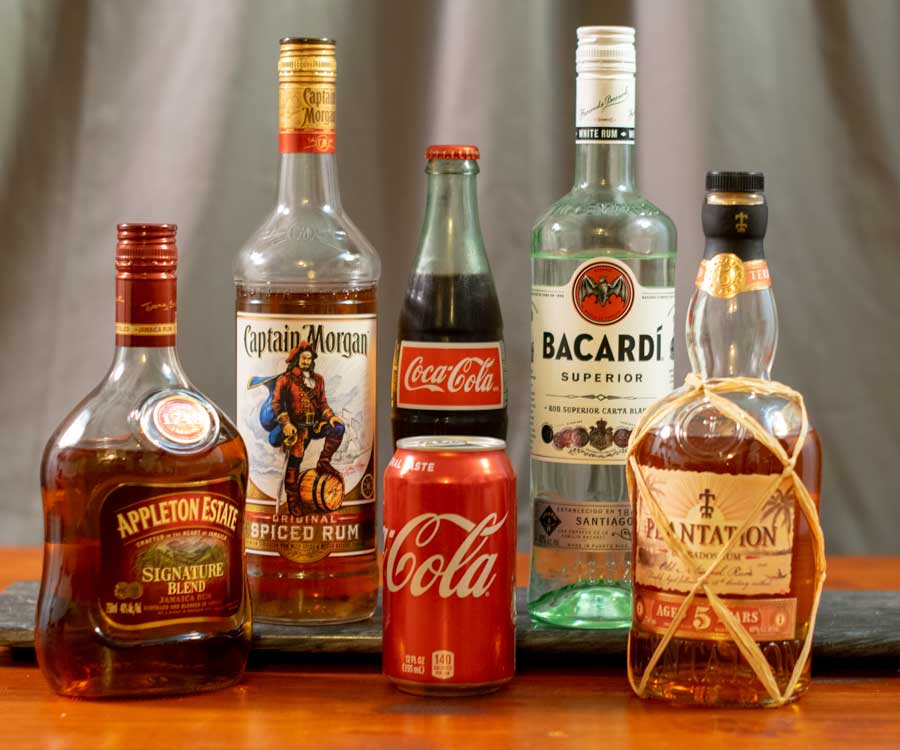 Each type of rum brings something different to the party

There are four main types of rum white, gold, aged, and spiced. Each of them brings something different to the party.

White rums are defined by their clear color and are the most common type of rum used in this cocktail. It’s relatively clean, sweet flavors are what most people associate with this drink.

Gold rums get their distinct gold color from a combination of barrel aging and additives that vary by the distiller. When they’re mixed with Coke they tend to have a slightly more robust flavor profile than white rum does.

Aged rums, especially high-quality ones, are designed to be sipped and are especially delicious served over a large chunk of ice on a hot day. Although they don’t usually get the same respect in the States as aged whiskey does, with their complex flavors and high drinkability they should.

Aged rums bring complexity and depth of flavor that make a this recipe taste more like a high-end craft cocktail than a simple mixed drink.

Spiced rums are made by infusing rum with spices that can include vanilla, cinnamon, nutmeg, and sugar. The most popular spiced rum to mix with Coke is Captain Morgan. Using a spiced rum creates a more complex cocktail with a variety of spice notes that vary by the distiller.

If you like using spiced rum try keeping the rum in the freezer, it helps to crystallize the sugar and produces a much more interesting drink than room temperature rum.

What Ratio of Rum to Coke Should You Use

Let’s be honest there’s not a lot of technique that goes into making a this drink. There are no floats, you don’t have to shake it or even run it through a blender, it’s just mixing two liquids over ice. 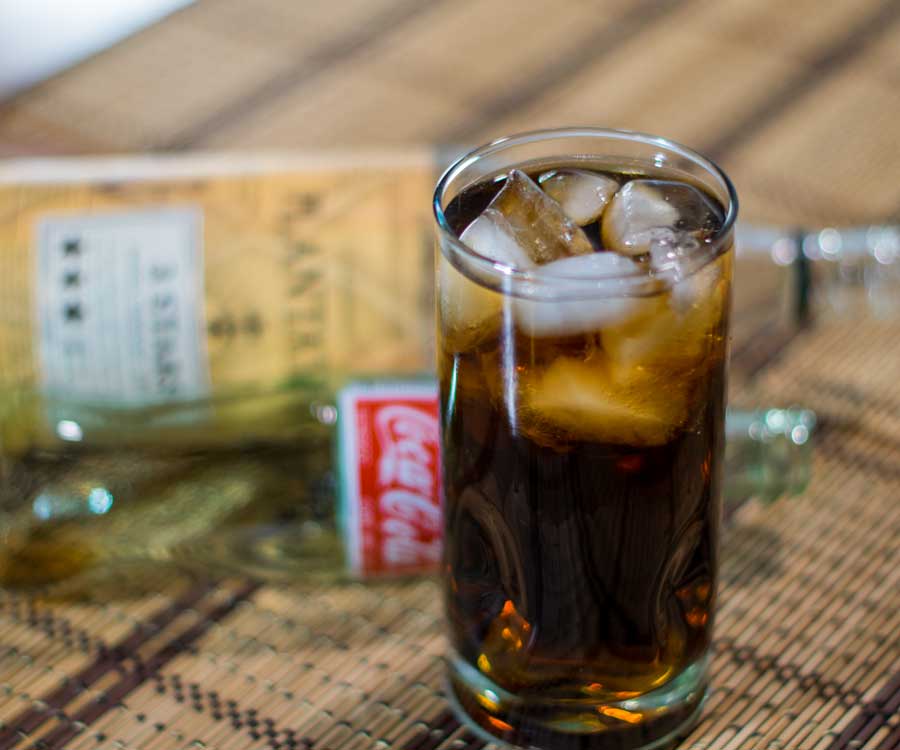 The reason the ratio matters so much is because the drink is so simple. The classic ratio cited in most older recipes is 1 part rum to 2 parts coke. A number of more recent writers argue for a ratio of 1 to 3 saying its a better fit for people’s current preference for sweet drinks.

For a great rum and coke, we use a ratio of 1 part rum to 2.5 parts coke, which works out to 2 ounces of rum to 5 ounces of coke in a 10-ounce highball glass filled with ice.

The added advantage of using this ratio, if you’re using cans of coke, is you can make two drinks for each can.

What we found in our testing is that a 1:2 ratio is very rum forward that will likely overpower drinkers who don’t love the taste of rum by its lonesome. On the other end, one made with a 1:3 ratio tastes a lot like a glass a coke and feels like the bartender is skimping on you.

While a drink made with a ratio of 1:2.5 is nicely balanced and was very much the middle bear in our testing with just the right amount of rum to coke.

What Type of Coca-Cola Should You Use

This is one of those small things that most people don’t think about when they’re mixing up a rum and coke. There are two different types of Coca-cola available in the States that have fairly different flavor profiles.

When you taste the two side by side their differences are easy to spot. The Coke made in the States is very flavor forward, with a hint of bitterness, especially at the beginning. While the Mexican Coke is smoother with less of an aftertaste.

What is particularly interesting about the Mexican Coke is that it tastes more like what I remember Coke tasting like then the stuff I drink all the time.

Two final tips, don’t make this recipe with Pepsi unless you like them cloying like sweet and always use lots of ice. Both the rum and the Coke in this recipe are better when they’re cold. And, if you’re looking for a variation that is a little more off the beaten path try our Old Fashioned Cuba Libré recipe.