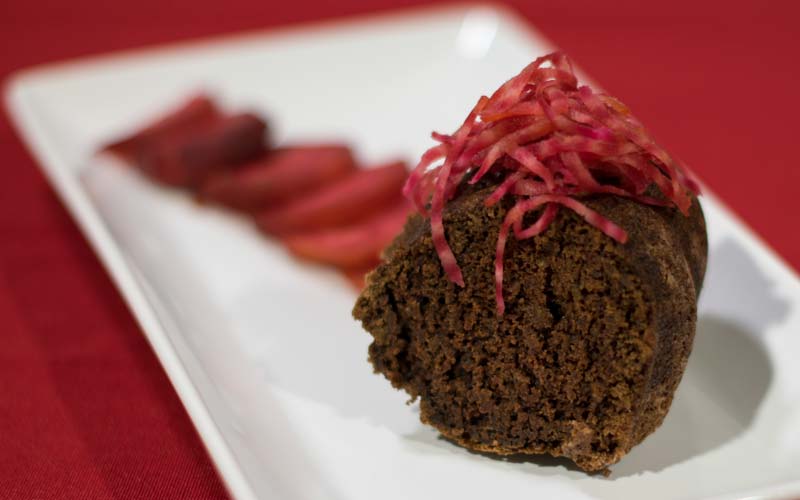 It’s time for a social event! Yay! Groups of people who know each other from one thing or another are going to hang out in a new environment! Sure! And the people you know won’t be able to make it?

Ok, you can do this. What? Now, what are they saying? “Hey it’s potluck, what are you bringing?” Um, I’m trying to bridle my bucking bronco social anxiety; I can’t think about food, I’ve got sweaty armpits! And I’m supposed to know what edible thing I will be constructing for consumption by others at a social event three weeks from now?

I may not be able to silence my anxiousness, but I always know what to bring to a potluck: Chocolate Beet Cake.

Wow. I’m surprised you made it to this sentence and didn’t immediately throw your laptop, tablet, phone, desktop or 1998 Palm Pilot across the room at the mention of chocolate cake being infiltrated by beets. Or maybe you were hoping the first mention was a mistake? It wasn’t, and I already said it a second time. The third time I mention it Beetlejuice shows up and tries to marry your daughter.

Ok, I make chocolate beet cake for every “bring a dish to share event.” But I don’t bring it because it’s a crowd pleaser, I bring it because it’s not. This cake causes adult humans to lose all sense of public decency. I literally have had people spit the cake out in from of me, the baker of said cake, on at least two occasions.

Some people will like this cake, and some people will HATE it, and then there’s a middle group that will just assume it’s chocolate cake. You can reveal later that it had beets to the middle group, in a less “eating your own son” version of Titus Andronicus.

Why make this cake for a potluck if it runs the risk of people wiping their tongues off like children who just ate dirt? This cake is a conversation starter. Which is arguably a far more important feature at a social event than another batch of whatever it is other people bring, which I never remember because I’m too busy having conversations with attractive strangers about my beet cake.

The Chocolate Beet Cake (sorry, Beetlejuice is on his way) is exactly that. Beets in a chocolate cake. It is a super moist flavorful cake, where beet lovers and haters alike are able to detect the beetiness flavor.  Do you like dry cake? Don’t make this one.

To make the beet cake you need some beets. I usually throw a whole bunch into the slow cooker to soften them up; it makes them easier to cut. You can use them raw as well, it looks prettier, but it doesn’t matter!

I don’t peel them either. I can hear the gasps from the Internet crowd. Sometimes I don’t even get all the dirt off, not on purpose, sickos, if I were trying to poison someone, I wouldn’t be using less than a gram of dirt. Yeah, I used the metric system there, maybe I am trying to poison you…with an international system of measure.

Try to make the beets as small as you can. If I had a food processor that works I would use that, but I don’t, so I just hit them with a knife until I get bored.

So once you have your beets, I don’t know how many beets, I usually use a bunch, you make the cake part. Many people have asked me “What do the beets replace in the cake?” The answer: nothing.

You still will need all the other things to make a cake. All this recipe does is add beets to a chocolate cake, deal with it. I sometimes pretend to use less sugar and sometimes I can’t find my measuring cups, so who knows what is going in. And contrary to my reference to the metric system earlier, I do not like to measure things. Which is why I only bake this one thing.

You put the flour, sugar, baking powder, baking soda, melted chocolate, and eggs together. Then you put in the beets. At this point, it will look like old chunky blood. Why do I know that? Imagination, sickos! Or too much television.

Pour the whole thing into any shape of pan. I like Bundt pans because the cake looks interesting, like a donut. Maybe you don’t like interesting or donuts, then good luck making friends at this potluck. The cake looks interesting, like a donut, when you use a bundt pan

One important note: grease the pan, with flour and butter or with just butter or cooking spray, this cake is sticky.

Bake at 350 degrees for 35 minutes, make sure to check on it since it will probably have to go longer. Ovens are like snowflakes, hot, clunky, inconsistent snowflakes.

Poke disappointed toothpicks into it. They’re disappointed because they are toothpicks and you are using them to test cake, and they didn’t go to school for that. You know the drill when it’s clean the cake is done.

Let it cool. Then attempt to get it out of the pan. Use a knife, use gravity, yell at it, but once it is out, there you go! Chocolate Beet Cake! I don’t frost it because I hate the work of frosting a cake. You, though, can knock yourself out.

And don’t get mad when people don’t like it.