What makes this creamed corn recipe special is how the roux and a little cream highlight the deep corn flavors in the dish and give it an almost luxurious texture.

Making creamed corn from scratch is an easy way to highlight the late summer flavors of fresh corn. What makes this creamed corn recipe special is the rich, creamy corn flavor that comes from scraping the milk from the corn cobs after the kernels have been cut off.

Before we get into how easy it is to make creamed corn, we should get one thing out of the way. Creamed corn made from scratch with fresh corn is something completely different than the stuff from the can. In the same way, boiled Brussels sprouts turned off an entire generation, canned cream corn has fooled people for years, giving a bad reputation to what should be one of our great late-summer dishes.

All across the midwest roadside stands sell fresh sweet corn that people buy by the bag full in August and September. The most popular way to cook it is by roasting the corn on the grill serving it on the cob with copious amounts of butter and salt highlighting the sweetness that comes from corn fresh from the field.

As delicious as it is roasted, there’s no better way to highlight the layers of flavor in late summer corn than to make creamed corn.

What is Creamed Corn

Creamed corn is a traditional dish popular in the Midwest and the Southern United States made with fresh sweet corn. The creaminess in the dish comes primarily from scraping the milky residue from the corn cobs after the kernels are removed. The milky residue or corn milk is combined with a roux to create a creamy sauce that the corn is cooked in and served with.

The secret to the best creamed corn is to use the freshest sweet corn available, just enough cream to give it a smooth texture, and to let the flavors of the corn speak for themselves.

A lot of recipes, including this one, add in some heavy cream to give the final dish a silky almost luxurious texture with a deep, robust corn flavor. Another popular technique is to puree some of the kernels, which helps to thicken the dish and infuse it with more corn flavor.

How to Make Creamed Corn

This easy creamed corn recipe is incredibly delicious and is fantastic with roast or grilled dishes.

To make creamed corn you’ll need fresh corn on the cob, some heavy cream, a sharp knife, and a pot. Start by removing the husk and silk from the corn, rinsing it under water to make sure all of the silk has been removed.

Using a sharp knife remove the kernels from the cob by slicing down the cob just behind the kernels. A tip that makes this process easier is to set the bottom of the cob in the hole of a bundt pan so when the kernels fall into the pan as they’re removed from the cob.

Once the kernels have been removed, the corn milk needs to be removed from the cobs. The easiest way we’ve found to do this is to hold the cobs upright in a small baking dish and using the back of a spoon to strum each cob as if you’re strumming a guitar.

The dish is fairly straightforward once the corn has been prepped. Start by making a roux in a saucepan followed by adding the corn milk and cream. Once the mixture starts to thicken add in the corn, salt, and pepper, lower the heat and cook for around 30 minutes. The long cook time allows the dish to thicken and for the flavors to develop.

The amount of liquid from the corn cobs will vary some, if it’s less than 1/2 cup add a little water or extra cream to make sure the corn doesn’t dry out or thicken too much while cooking. You can also cook the corn covered to keep in more the liquid.

The final dish should have a consistency that is midway between a thick soup and a custard with each kernel being able to move freely on its own.

Creamed corn is usually served as a side dish. It is especially popular at barbecues served with a Smoked Pork Loin, Grilled Ham with Maple Bourbon Glaze, or Smoked Chicken Quarters. It’s particularly delicious served at Thanksgiving along with a beautiful golden brown Smoked Turkey.

A few side dishes that go well with the corn are Garlicky Refrigerator Pickles, Grilled Butternut Squash, and Smokehouse Potato Salad.

This is an easy dish to play with the seasonings so the corn complements the flavors of the dishes it is being served with. We often add bacon and roasted chilies to give it a southwestern vibe. It is also frequently added to cornbread or used as the base for corn chowders.

The best way to reheat it is on the stovetop over low heat. Adding a small amount of cream to help loosen it up. Creamed corn can be frozen and stored for three to six months.

How do you make creamed corn from scratch?

All you need to make creamed corn from scratch is fresh corn on the cob and a few other ingredients.

What is the difference between creamed corn and regular corn?

How do you thicken creamed corn?

The best way to thicken cream corn is to use a roux, which consists of equal parts of flour and butter, as the base for the dish. The advantage a roux has over using corn starch is it has a smoother, less grainy texture, and the cooked butter and flour mixture deepens the overall dish’s flavor.

Does creamed corn have cream in it?

The cream in creamed corn comes from the milky pulp that comes from the cob after the kernels have been removed. Some recipes use cream to give the final dish a smoother texture and to control its consistency. 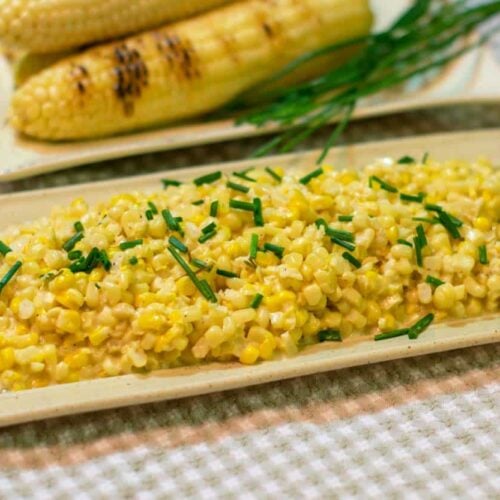