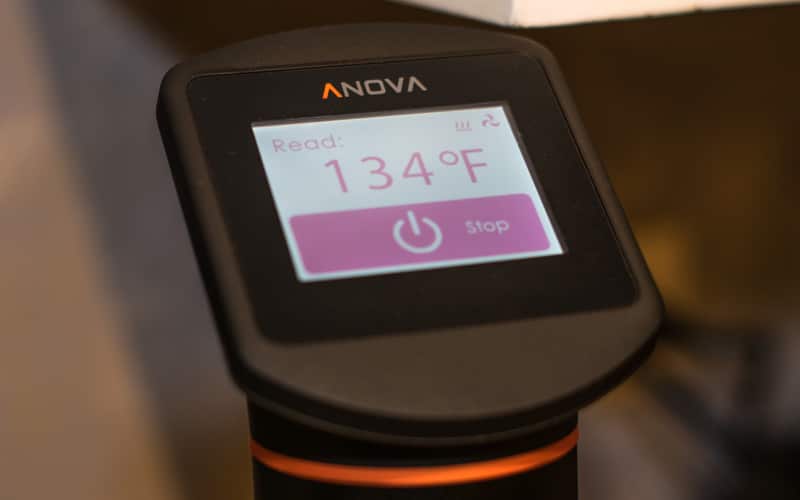 The Anova One immersion circulator is a sleek, well-designed sous vide cooking machine that has the power to transform how you cook.

For the past few months, we’ve been cooking just about everything in the house with the Anova One to test it and to explore the world of sous vide. It’s been fun to learn a new way to cook, and it’s helping us think differently about how we prepare what we eat.

If you’re not familiar with sous vide, it involves cooking food that is vacuum-sealed in plastic in a warm water bath for a long time.  Sous vide is a relatively new cooking method that provides a range of options that you can’t get from traditional cooking methods.

The Anova One is one of the most popular immersion circulators to come out in the past few years that provides home cooks with an affordable way to cook sous vide.  What makes sous vide special is how tender and moist food can be when it’s sealed up tight and cooked for a long time in its own juices.

The design for the Anova One is clean and well thought out.  The minimalist stainless steel exterior, LCD screen, and range of colors take their queues from the Apple school of design, which helps make the machine easy to use and nice to look at. It also comes with one of my favorite product warnings ever – you’re not supposed to use it to heat a hot tub.

The Anova One contains a heater and a directional pump that heats and circulates water at a constant temperature.  One of the keys to cooking sous vide is making sure the water stays at a stable temperature and is continuously circulating to prevent hot and cold spots from developing.  The ability to cook food all the way through at it’s finishing temperature is unique to sous vide.

In addition to the circulator, you’ll need a large pot or container that is heat resistant and the ability to vacuum-seal whatever you’re cooking.  To vacuum-seal your food you can use either a straw and a good freezer bag, or you can buy a vacuum-sealer that lets you make your own bags and automatically vacuums out the air.

To hold everything in place, the Anova One has a clamp that screws on to the outside of your cooking container, which is nice if you’re going to let something cook for twelve hours.  One of our few small quibbles is it can be hard to see the minimum and maximum water lines once the circulator is in the water.

The LCD controls are simple to use and let you set the temperature and cooking time.  One thing we didn’t love about the timer is it turns the cooker off when the time is up, which make sense if you’re using it to tell the cooker when to stop cooking, but not very helpful if you’re using it as timer for a dish like scrambled eggs that you need to come back and kneed every so often.

In our experience, the Anova One did a good job of coming up to temperature quickly and was able to hold a steady temperature.  At higher temperatures, there were some issues with evaporation, which meant we had to periodically add water, but this only happened when we were cooking things for a very long time.

At its best the food is extraordinary.  There’s a reason why so many chefs rave about what you can do with sous vide.  The ability to cook food evenly all the way through to an exact temperature, time and time again is a great addition to any kitchen.

There’s also a lot of value for people who really like to cook. The way the Anova One lets you play with time and temperature, it’s a bit like having a hot tub time machine in the kitchen. It’s particularly good with large, tough cuts that would normally be braised or thin tender cuts that are easy to overcook.

The two best things we made with it were a leg of lamb that was medium rare and fork tender all the way through, something we’ve never been able to do with any other cooking method and pork chops that were divine.

The only real downsides to cooking sous vide is how long it can take to cook something, which means you need to plan ahead and the fact that food doesn’t smell when it’s cooked underwater in plastic.  Call us old-fashioned, but we really like it when the whole house smells like we’ve been cooking all day.

The Anova One is a great immersion circulator that is easy to use and does everything it’s supposed to.  The best reason to pick one up is it opens up a whole world of cooking that you can’t get with other cooking methods.

If you want to learn more about cooking sous vide check out our piece on Getting Started Cooking with Sous Vide.