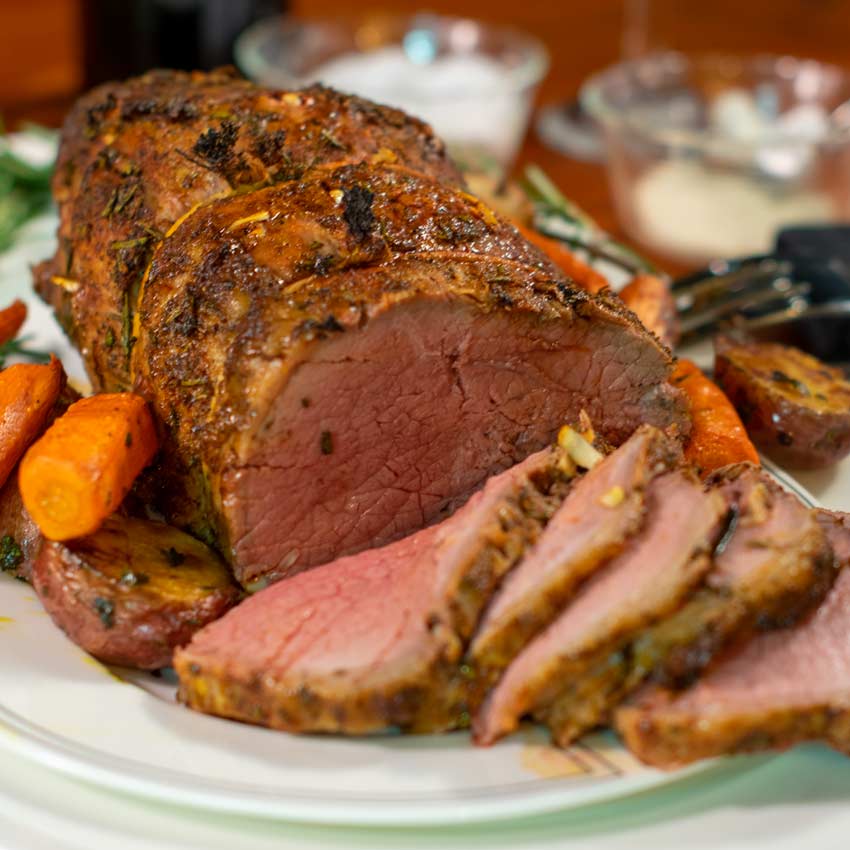 Slow roasted, mouth-watering roast beef so tender that it melts in your mouth is a lot easier to make at home in the oven than most people think. All you need to learn how to make roast beef is this recipe, a nice roast, and a couple of hours.

Long a staple of Sunday night dinners, making roast beef at home has somewhat fallen out of favor, which is a bit of a travesty. When it’s cooked right, with a crisp crust paired with deep garlic and herb flavors a roast has so much to offer. It can be the centerpiece to a nice dinner, the starting point for amazing sandwiches, or sliced paper-thin and served as a cold appetizer. It also works well as a tasty late-night snack.

To create this roast beef recipe we wanted to respect the techniques and ingredients that helped make the dish a classic while adapting it to how people cook today. That meant figuring out what type of roast to use, which seasonings highlight the flavors in the beef, and the best way to cook it.

It also meant figuring out the answers to perennial questions, such as do you cook a roast covered or uncovered, brown it in a pan or in a hot oven, how long should it cook, what’s the right temperature to pull it out of the oven, and how long should it rest. All of which are answered below. 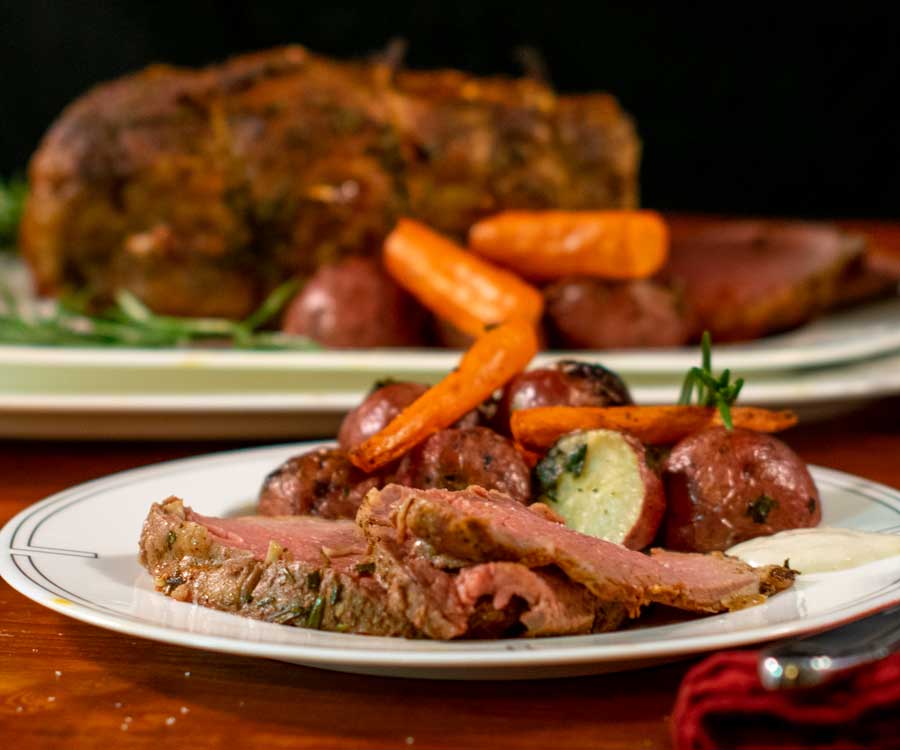 We also wanted the recipe to be easy enough to use and so delicious that people would make it over and over again.

There are lots of choices when it comes to picking out the type of roast you want to use. In general, we prefer using Eye of Round over Top or Bottom Round when we’re making roast beef for dinner or to have in the house for sandwiches or as leftovers.

In our testing, we found that Eye of Round was usually a little more tender and just as flavorful as similar cuts as long as it’s slow-roasted and sliced thin. One of the nice things about any of these cuts is how affordable they are.

If you’re making a roast for a special occasion or the holidays, think about getting a standing rib roast or prime rib, the additional marbling and tenderness mean they can be served as thick slices. They’re also going to be more expensive but are real showstoppers when they’re carved at the table.

When it comes to Chuck Roasts, this recipe will work fine but we’d recommend turning them into a Tender and Delicious Pot Roast.

Let’s be honest, under-seasoned or overcooked roast beef is the very definition of blah, which is why seasoning a roast is so important.

A part of the challenge in seasoning any large cut is figuring out how to infuse every bite with flavor. Our approach is to cut tiny slits in the outside of the roast to slide slivers of garlic into each cut, creating pathways for the flavors in the garlic and spice rub to deeply embed themselves into the meat. 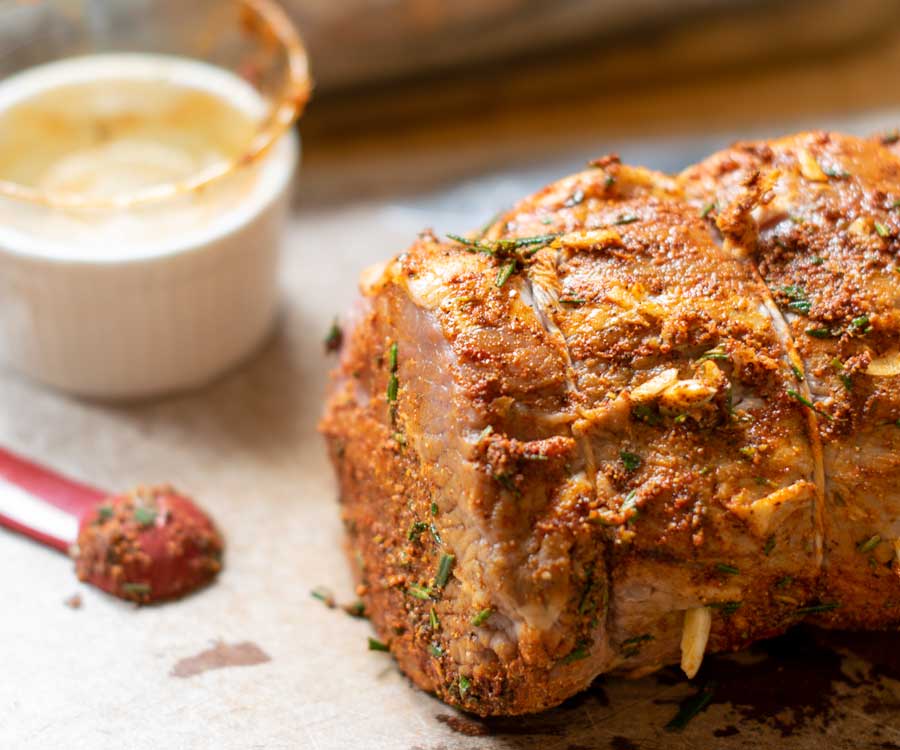 Cutting slits in the roast helps the seasoning soak in

The reason we recommend using fresh garlic and rosemary is that they impart so much more flavor than their dried or powdered versions. We also encourage everyone to sprinkle a small bit of salt across the top of the roast after it’s been sliced and right before it’s served. It’s almost magical the way the salt brings the flavors in beef to life.

Tender is the Beef Roast

Learning how to cook roast beef that is tender and juicy is easy once you have the basic technique down and a few helpful cooking tips.

To start, let the roast come to room temperature before roasting. We like to season it when it comes out of the fridge, giving time for the flavors to soak in while the beef comes up to temperature. It’s also ok to season everything the night before. 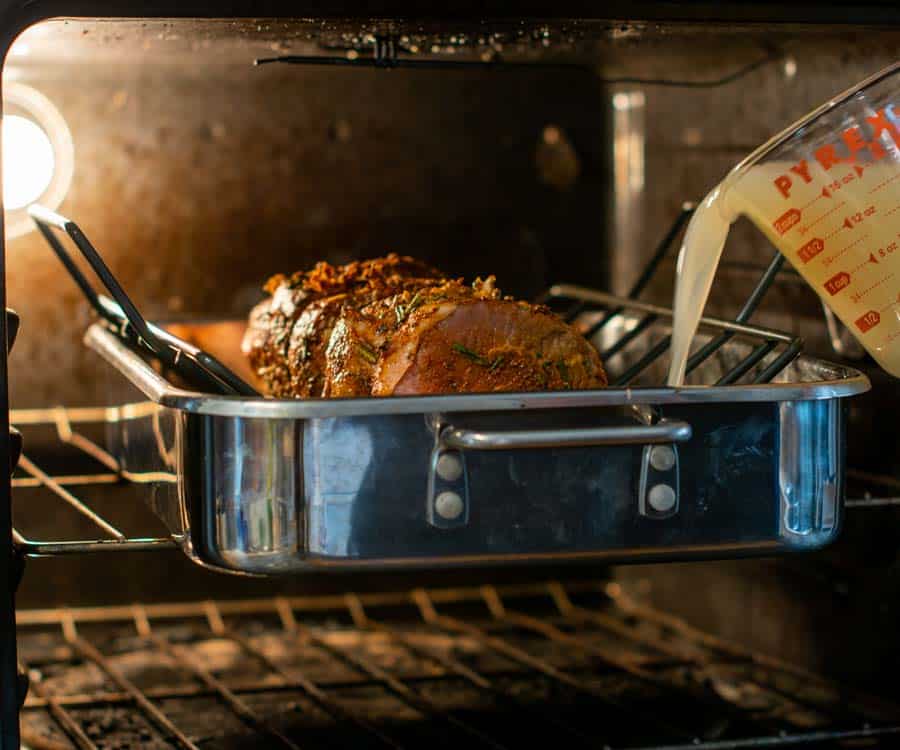 To cook it nice and even use a roasting pan with a rack that lets the air in the oven circulate around the beef. The roast should also be cooked uncovered to help develop flavor and texture.

The best way we’ve found to create a nice crust on the outside of a roast is to start it in an oven that has been preheated to 450℉. Once the roast has been in the oven for 15 minutes the heat should be turned down to 325℉ and cooked until it reaches the desired internal temperature.

The preheated oven method is significantly easier than trying to brown a roast in a pan before sticking it in an oven and produces a better result.

To help make the roast even juicer, add liquid to the roasting pan, to create a small steam bath in the oven. Beef or chicken stock works well, especially if you want to use the drippings to make gravy. Adding liquid to the pan also gives you something to baste the roast with, helping to add depth of flavor.

The real key to fabulous roast beef is to cook the roast to your desired level of doneness. The best way to keep track of the roast’s temperature is to use an oven-safe thermometer and to remember that the internal temp will rise around 5 degrees while the roast rests when it comes out of the oven.

A general rule of thumb for roast beef cooking times is:

Here is a temperature guide for doneness and a reminder that using a thermometer is more accurate than using a clock.

Giving the roast time to rest is key to keeping it tender and juicy. A tip when the roast comes out of the oven is to leave it in the roasting pan, covered with a piece of aluminum foil for at least 15 minutes, which also happens to be the amount of time it takes to make gravy. 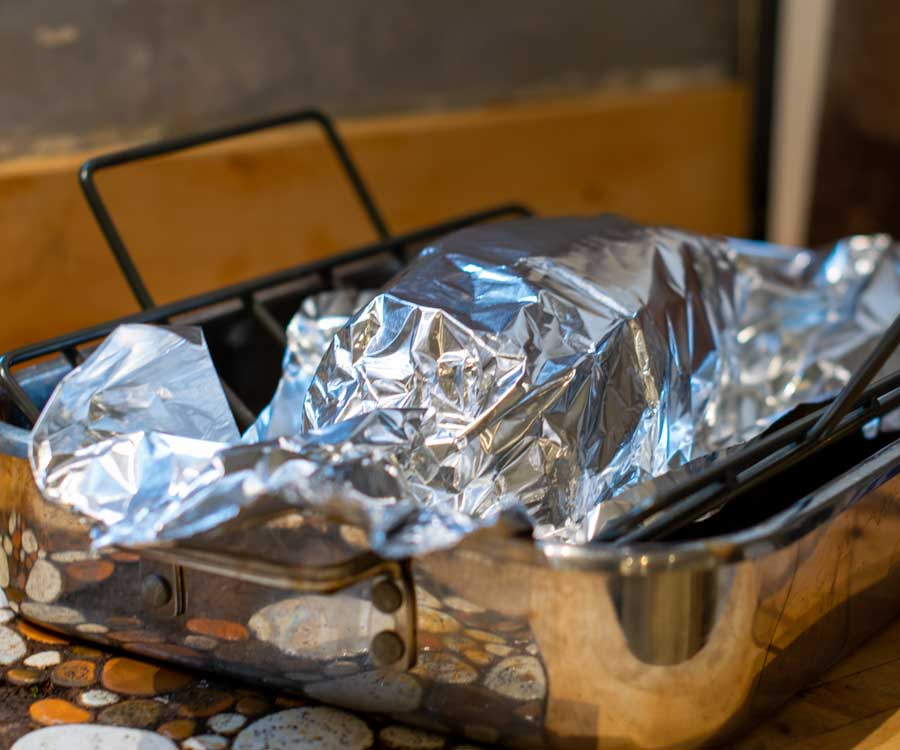 When you’re ready to slice the roast, make sure to use a sharp knife and cut across the grain, slicing it as thin as you can. In general, the leaner the roast the thinner it should be sliced.

A couple of other tasty ways to cook beef roasts are to sous vide them or use the smoker.

There are lots of ways to serve roast beef. If we’re serving it for a dinner party we like to make White Cheddar and Horseradish Mashed Potatoes along with a nice gravy using the pan juices as a base. 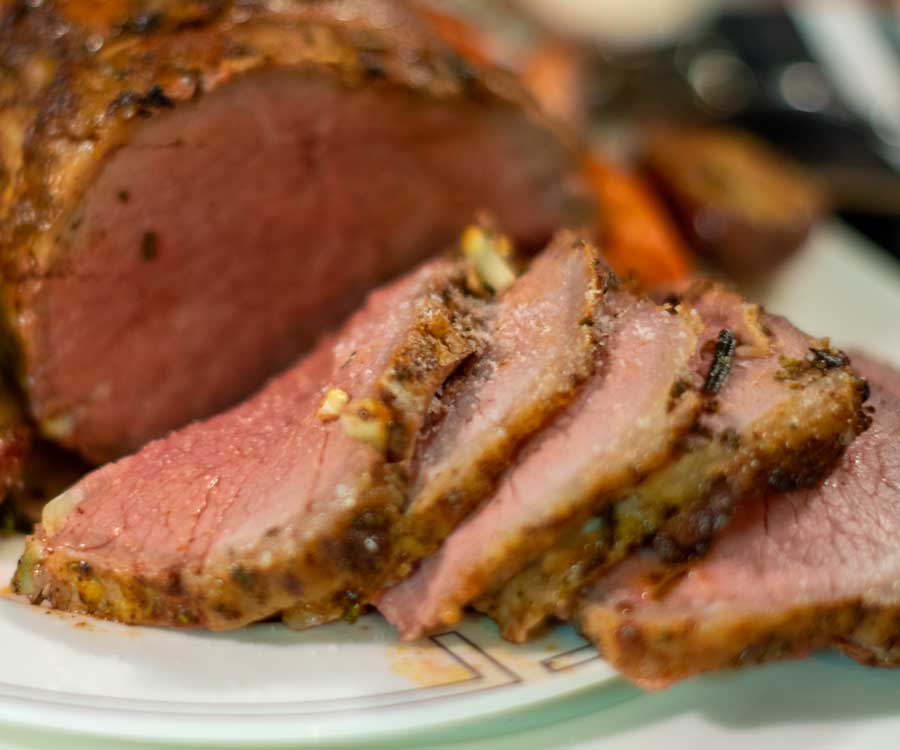 A dash of salt brings the beef’s flavors to life

If we’re gilding the lily we’ll serve some roasted or grilled mushrooms that have been tossed with olive oil, lemon juice, and fresh herbs that people can ladle across the top of their beef.

A few other side dishes that pair well with this recipe are Sautéed Rainbow Chard and Green Beans with Balsamic Vinegar. As far as drinks go, you’re not going to do any better than a Classic Old Fashioned or Rusty Nail.

Roast beef cooked this way is delicious as leftovers and will last for a week or two in the fridge after it’s cooked. It can also be frozen for later. The best way we’ve found to reheat it, sliced or whole, is in a 300℉ oven until it’s been warmed through.

Whether we’re serving the roast for dinner or as sandwiches we like to put some horseradish sauce and a few good mustards on the table for people to choose from along with a little dish of salt that they can sprinkle on top.

There’s a lot to love about smoked pork loin. It’s a versatile cut that can be seasoned hundreds of different ways, smokes relatively quickly, and looks amazing on the plate.

This is the Instant Pot Chicken and Rice recipe to make if you love tender chicken, fluffy rice, and flavors that pop.

What makes this grilled ribeye steak recipe so delicious is how the tender, well-marbled cut, absorbs the flavors from the rosemary and garlic along with the heat and smoke from the grill.

These easy ground beef enchiladas are filled with so many delicious flavors and interesting textures that they’ll quickly become one of your favorite comfort foods.

Whether you like your wings baked, fried, grilled, smoked, or cooked in a slow cooker we’ve gathered some amazing chicken wing recipes from across the internet.

Instant Pots have completely taken over the world of cooking. Everywhere you turn someone has a new recipe that you absolutely gotta to try or is talking about how it saved their life. To help bring some sense to this craze we’ve put together a completely uncomprehensive guide of things you should never, ever make in your Instant Pot.