Cooking pork chops sous vide is one of our favorite ways to cook plump, juicy, flavorful pork. What we love about this sous vide pork chop recipe is how easy it is to make, the way our special pork rub infuses everything with flavor, and how using sous vide cooks everything perfectly from edge to edge.

In this guide, we take a deep dive into how to cook sous vide pork chops, including what to look for in a chop, choosing the right time and temperature to fit your taste preferences, and how to finish juicy pork chops on the grill, in a pan, or with a torch.

What makes this recipe stand out is how the cooking method and delicious dry rub combine smoked paprika and brown sugar to give the pork rich flavors and a supple texture that delivers bite after bite.

Sous vide is a cooking method involving vacuum-sealing food in a bag and using an immersion circulator to cook it using a precise temperature in a hot water bath. The term is French for “under vacuum” and was originally developed for restaurants in the 1970s.

If you’re interested in learning more about this innovative technique, read What is Sous Vide Cooking & Why it Works.

An advantage to using sous vide, compared to traditional methods, is it’s almost impossible to overcook or dry the pork out. Using a water bath creates a very forgiving cooking environment, with very little difference between the chops cooked for an hour-and-a-half and those cooked for two-and-a-half hours, so once they get started, there’s lots of time to get the rest of dinner ready.

As a cooking technique, sous vide helps ingredients develop tenderness and retain their moisture, so there’s no need to brine pork cooked this way.

Not all pork chops are created equal. When choosing which ones to cook, look for pork that has a clean smell and a fresh look. Some popular choices for cooking sous vide include ribeye, pork loin, and center-cut chops, all of which work for this recipe and with this cooking method.

This recipe has been tested and is delicious with bone-in or boneless pork chops. Sous vide works well regardless of thickness. We prefer chops around an inch to an inch-and-a-half thick, making them ideal for feeding one person. Unless they have an excess amount of fat, we recommend leaving it on to keep the meat nice and juicy and add additional flavor.

The advantage to cooking bone-in pork chops this way is that the flavors from the bone have time to infuse themselves into the meat. Bone-in has a slight disadvantage when it comes to searing, where the bone can make them a little harder to lay flat and get a good sear.

Boneless chops, especially thicker ones, are ideal for cooking sous vide. Their uniform size and shape make them easy to finish, and they can be sliced thick or thin to create an eye-catching presentation.

There are countless ways to season pork chops. As a lean white meat, pork excels at picking up flavors from fresh herbs and spices, allowing it to act as a blank canvas for whatever you’re in the mood to eat.

The seasoning for this recipe uses one of our favorite dry rubs that combine smoked paprika and brown sugar with a touch of mustard and garlic powders. The smoked paprika adds depth and a touch of smokiness, while the brown sugar compliments the natural sweetness in the meat. The spice rub can be used to season any cut of pork, whether it’s being grilled, roasted, or cooked sous vide.

Other options include cooking the chops with fresh herbs like rosemary and thyme, covering them with a delicious marinade, using dried or prepared mustard, or using Southeast Asian flavors like ginger or lemon grass.

Cooking sous vide is all about finding the right combination of time and temperature that give the flavors from the seasoning enough time to infuse themselves into the food being cooked and the right temperature to hit the sweet spot for texture and doneness.

The sweet spot for perfectly cooked sous vide pork chops is using a temperature between 135℉ (57℃) and 140℉  (60℃) for two hours. Set your precision cooker closer to 135℉ (57℃) if you prefer pork with a touch of pink and very juicy. Set it closer to 140℉ (60℃) if you like pork cooked medium with a firmer texture.

The 2-hour chop had a more supple appearance and texture; it both looked and tasted juicy. It has a sublime mouthfeel and tenderness that make this our go-to time.

The 4-hour chop was slightly drier than the one cooked for 2 hours but was still nicely cooked with some juiciness and a decent texture.

The 8-hour chop was much drier than the other two; it had an almost jerky-like appearance and tasted overdone compared to the others. It wasn’t gummy, a descriptor often applied in sous vide to things that have been cooked too long, but it’s easy to see how it could get there.

We cooked chops for two hours to find the ideal temperature at 130℉ (54℃), 140℉ (60℃), and 150℉ (65℃). We found a significant difference in doneness between the three different temperatures that ranged from primarily pink to almost overdone.

The 130℉ (54℃) one was very juicy with lots of pink, much like a steak cooked closer to rare than medium-rare. It was a bit underdone for our tasters, with a texture that was on the chewy side.

The 140℉ (60℃) one was nicely cooked; it remained juicy with a reasonably supple texture. It’s an ideal temp if you prefer a little more bite to your meat.

The one cooked to 150℉ (65℃) was very well done, with an almost roast pork texture and flavor. This is how to cook them if you like your pork cooked the way grandma used to make it.

It is possible to cook frozen pork chops sous vide, starting with them still frozen. This is not the ideal way to infuse them with flavor. The general rule of thumb is to add 30 to 60 minutes of the cooking time, depending on thickness.

As good a cooking method as sous vide is, it doesn’t produce a golden brown crust on the outside of the meat or provide any additional flavors that come from the direct application of heat – i.e., browning, grilling, etc. Something easy to remedy by using a finishing step after they’ve finished their bath.

The key to finishing anything sous vide is to keep in mind that it’s already finished cooking, and all your doing is enhancing its flavor and appearance.

There are three great ways to finish pork chops cooked sous vide. They can be seared, grilled, or torched. A tip, regardless of method, is to pat the flavorful pork chops with a dry paper towel before finishing them. This helps reduce excess moisture and promotes browning.

To quick sear them, heat the skillet until it’s scorching, add a small pat of butter, and sear them in a single layer for a minute to a minute and a half per side. The goal is to brown them on the outside without overcooking them on the inside.

The pan can then be deglazed using some wine or stock to make a simple pan sauce that can be served with the pork.

We prefer finishing sous vide pork chops on the grill because it gives them a little char and crispiness on the outside and for the way the grill brings out the flavors from the rub.

The chops should be finished on a preheated medium-high grill for one to two minutes per side.

Finishing With A Torch

The chops can be finished with a propane torch if you want to put on a show for your guests. To finish them with a torch, use a pair of tongs to hold the chops and move the torch back and forth over them until they’ve browned.

It usually takes a minute or two per side to brown the chops using the same type of torch used for home plumbing projects that can be picked up at any hardware store. These torches work because they have bigger flames and are much less expensive than most of the fancy sous vide specific torches on the market.

Obviously, be careful where you do this and make sure there’s nothing flammable around.

Once cooked, the pork can be stored in an airtight container in the fridge for 3 to 4 days. The best way we’ve found for reheating them is placing them in a 350℉ (177℃) oven for 10 to 15 minutes in a covered baking dish.

The amount of time will vary depending on thickness. It’s worth noting that they only need to be reheated until they reach your preferred serving temperature and that they don’t need to be cooked again.

This is an easy recipe to double or triple when having people over for dinner. When serving pork seasoned this way, we like to start with a Boulevardier or Classic Old Fashioned.

A few side dishes that compliment the pork are Creamed Corn, Sauteed Green Beans with Balsamic Vinegar, and Grilled Sweet Potatoes. For a delicious way to top the pork, try this Homemade Gravy Recipe.

If you’re looking for a delicious dessert, there’s nothing better than the combination of tart rhubarb and buttery shortbread in these Rhubarb Bars or a piece of warm Apple Crisp. 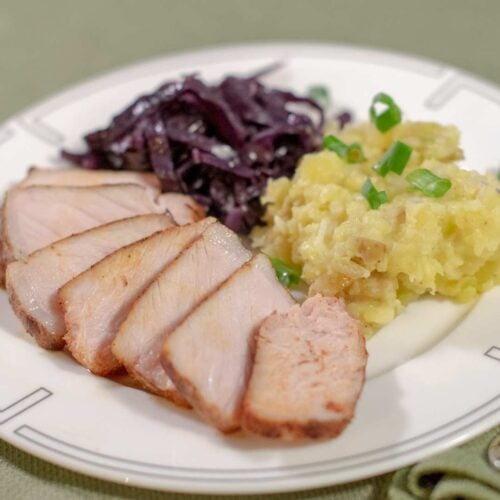 If you’re learning to cook sous vide, read our story on Getting Started Cooking Sous Vide.